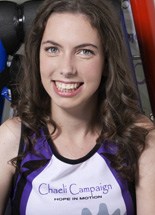 Michaela ‘Chaeli’ Mycroft was born on the 30th August 1994 in South Africa. At 11 months old, she was diagnosed with Cerebral Palsy; a group of lifelong conditions that affect movement and coordination. From an early age, Chaeli set out to be an ability activist, establishing the charity ‘The Chaeli Campaign’ with her sister Erin and three friends, when she was just nine years old. She is a prominent advocate for the rights of children with disabilities and their access to the same opportunities as able-bodied youth.

Chaeli’s charity work and activism is truly inspiring as she is determined to make sure that her disability was seen as a blessing not a burden. She uses her experiences to advocate for better rights, raise awareness for vulnerable children and provide financial support to families in need. Throughout history people with disabilities, particularly women, have been ostracized, punished and degraded so to see a young woman with disabilities fighting to change societal views and remove these barriers is inspirational as I believe it helps people in similar situations see how successful, influential and powerful people living with disabilities are.

Alongside her activism, Chaeli is a huge advocate for pushing yourself and exceeding expectations, something that I think we could all be empowered by. In 2015 she became the first female quadriplegic to summit Mt Kilimanjaro; celebrating her 21st birthday at the top. Then on the 29th May 2016, Mycroft made history alongside Anita Engelbrecht to become the first wheelchair athletes to complete the Comrades Marathon. In fact, the only reason that the two women were allowed to compete is because Mycroft persistently lobbied the race organizers to let wheelchair users participate.

I am in awe of Michaela not only because of her commitment to embracing such difficult endurance challenges but also because of her determination to prove that living with disabilities doesn’t mean ‘not-abled’. Far from it! She is actively changing the way that society has wrongly viewed people with disabilities for centuries; using her disability to fight for a change in politics, law and attitudes. In 2011, Chaeli was awarded the International Children’s Peace Prize in recognition of her contribution to improving, and advocating for, the rights of vulnerable children. She was also the recipient of the first-ever medal for social activism awarded by the Nobel Peace Laureates in 2012 and was selected as a Global Changemaker in 2018. Awards such as these are a real testament to the work that Mycroft has done since she was a young girl. She is a role model for everyone living with a disability that has been marginalised, told they can’t do something or had to face societal prejudices and inequality.