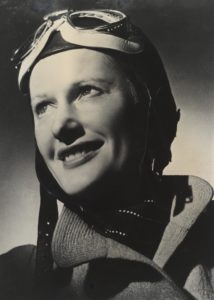 Born in Kew, New South Wales, Australia in 1915, Nancy Bird became the youngest Australian woman to gain a pilot’s license at the age of 19. As a girl, Nancy had a fascination with flying. At age 13, Nancy dropped out of school to help her father at his general store. However, Nancy did not let this setback stop her from achieving her dreams. In 1933, Nancy enrolled in flying lessons from Sir Charles Kingsford Smith, the first man to fly across the mid-Pacific. While it was not unheard of for women to learn to fly for recreational purposes, Nancy was unique in both her age and her desire to become a career pilot. When she was awarded her commercial pilot’s license at the age of 19, Nancy began touring with Peggy McKillop. Together, they would fly over county fairs and give people, many of whom had never seen a plane before, joyrides. It was during this time that Nancy met with Rev. Stanley Drummond, who along with Nancy created a flying medical service in the outback. In 1935, Nancy began to fly far-removed patients to the hospital in her plane that had been equipped to function as an ambulance of sorts. At the age of 21, Nancy won the Ladies’ Trophy in an air race from Adelaide to Brisbane.

Prior to WWII, Nancy took a break from flying to do promotional work in Europe for a Dutch airline. When WWII broke out, Nancy flew back to Australia to train women in the necessary skills to back up male pilots in the Royal Australian Air Force. Nancy married Charles Walton at age 24, when she adopted the nickname “Nancy-Bird.” In 1950, Nancy-Bird founded the Australian Women Pilots’ Association. While she is most known for her trailblazing work as a girl and young woman, Nancy-Bird continued to support those in need throughout her life. In 1997, she was declared an Australian Living Treasure by the National Trust of Australia. Nancy-Bird passed away on January 13, 2009 at the age of 93.

Nancy-Bird Walton was an inspiration to many women pilots. Despite suffering from economic setbacks during the Depression, Nancy-Bird achieved her dream to become a pilot. After her groundbreaking licensing at 19, Nancy used her skills to help others in need. First, as a pilot of a medical plane and later training individuals during WWII. Her achievements should serve as a reminder to children everywhere that regardless of how big their dreams are, they can be achieved.