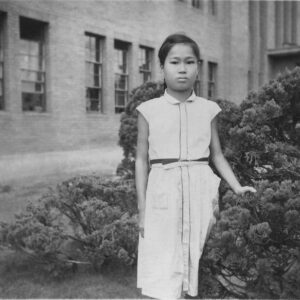 Born in 1943, Sadako Sasaki was just two years old when the American pilot Paul Tibbet flew his B-29 bomber, the Enola Gay, over Hiroshima, Japan. On August 6, 1945, by order of then President Harry S. Truman, Paul and his crew dropped one of two atomic bombs over the city. Sadako was one of 350,000 people living in the city. Sadako and her family lived a little over one mile from the bomb’s hypocenter. Accounts of the event tell of a blinding white light flashing through the city, followed by a huge boom which could be heard miles away. Fires broke out all over the city and radioactive black rain fell from the sky.

Sadako, along with her mother and brother, survived the initial event. Sadako’s grandmother is also said to have left with the family but turned back to grab some heirlooms from the family home. She was not seen again. Sadako’s father was not in Hiroshima at the time of the bombing. The surviving members were eventually reunited.

Sadly, such an event does not come without additional after effects. In February 1955, Sadako was diagnosed with leukemia, which was known to have been caused by the atomic bomb 10 years earlier. Whilst in the hospital Sadako remained happy and resilient. She felt joy when a Red Cross worker gave her a paper crane. When discussing the paper crane with her father he told her that Japanese folklore says that a crane can live for a thousand years, and a person who folds an origami crane for each year of a crane’s life will have their wish granted. Sadako was inspired by this story and began folding paper cranes so that her wish of becoming well again could be granted. After reaching 1,000 cranes and not becoming magically well again she continued to fold cranes so that her fathers debt could be forgiven. On October 25, 1955, with 1,300 origami cranes hanging overhead, Sadako died, aged just 12 years old. In 1958, a statue of Sadako holding a golden crane was unveiled in the Hiroshima Peace Memorial Park. At the foot of the statue a plaque reads: “This is our cry. This is our prayer. Peace in the world.” While Sadako was unaware of how far her message of peace went, thousands of US and Japanese children remember her spirit by folding and exchanging 1,000 origami cranes each year.

Sadako’s story, while a sad one, gives me hope and peace everytime I think of her and her cranes. I was lucky enough to be one of these US children exchanging cranes in elementary school reflecting on how good can come from bad. I believe Sadako’s story is also one of patience. As an adult looking back on this period of my life, I wish I had known her story as intimately like Ann Frank rather than just as an anonymous girl. While there are hundreds of thousands of tragic stories from World War II it is important that we do not let them become anonymous and generic.